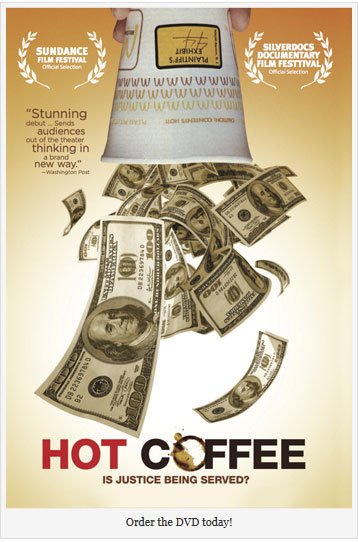 "Hot Coffee" made its debut at the Sundance Film Festival in 2011. The film documents corporate America's attempts to limit the power of regular citizens to seek justice in the civil courts.

It explains the propaganda campaign cooked up by a Washington, D.C. public relations firm to skew public opinion against the outcome of a case involving McDonald's hot coffee and the serious injuries it caused to Stella Liebeck.  "Hot Coffee" will change your mind about civil justice.

Is Justice Being Served?

Seinfeld mocked it. Letterman ranked it in his top ten list. And more than fifteen years later, its infamy continues. Everyone knows the McDonald’s coffee case. It has been routinely cited as an example of how citizens have taken advantage of America’s legal system, but is that a fair rendition of the facts? Hot Coffee reveals what really happened to Stella Liebeck, the Albuquerque woman who spilled coffee on herself and sued McDonald’s, while exploring how and why the case garnered so much media attention, who funded the effort and to what end. After seeing this film, you will decide who really profited from spilling hot coffee